My mother, Gail Lee Martin, grew up in the 1930s but was more fortunate than many as her father had a job during those hard times. Working for Phillips Petroleum, meant his family had a company house to live in and a nearby school to attend. A friend of mine spoke to a classroom of […]

I saw a vintage photo of men in suits lounging on deck chairs. Although my grandfather, Clarence McGhee, made two ocean voyages, they weren’t on cruise ships with lavish buffets and deck chairs. Those voyages were aboard troopships that carried him and other doughboys to France in World War I and then home again in […] 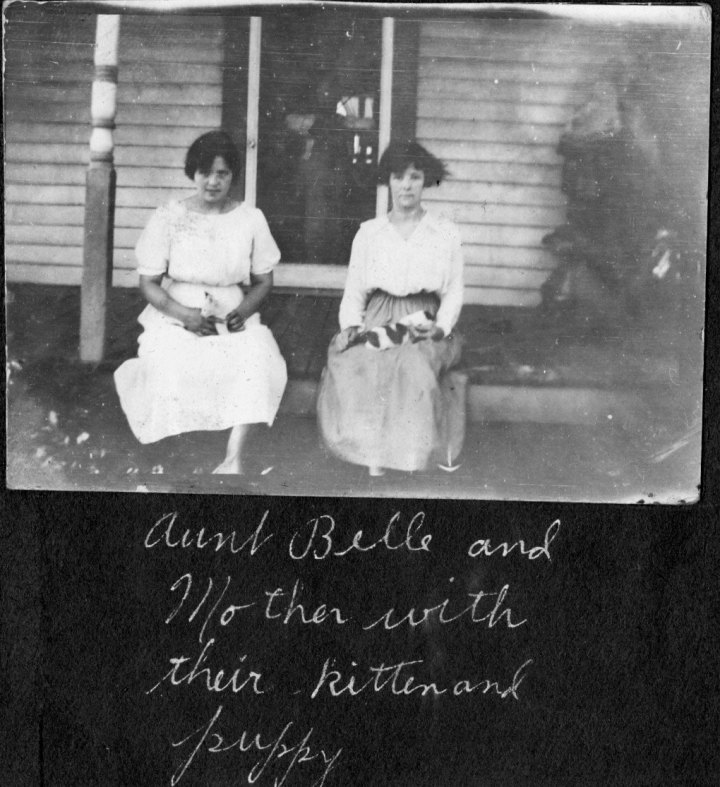 The photo shows my grandmother, Ruth Vining, in about 1918 with her older sister Belle (on the right). Belle’s full name was Lillian Belle Vining.
Belle was born on September 14, 1884, in Kansas City, Missouri. Her father, Henry, was 46 and her mother, Nancy Jane Babcock, was 33. Lillian Belle had seven brothers and eight sisters. Three of those were half-siblings from her mother’s first marriage to Burr Ashlock.
When she was 12 when her youngest sister, Ruth, was born. A month later, their father died of typhus, leaving the family on hard times.
The 1900 U.S. census shows when Belle Vining was 15 years old, the family lived in Independence, Kansas. Before that, they are in Thayer, Neodesha, and Chetopa, Kansas. I don’t know what reasons led them to move around.

In researching her life, I found she was married 3 times. The first time to Charles Williams, then to Orville Espie Brock, and lastly to Monte Scollins.
Charles and Belle Williams had three children; a daughter, Jesse, and sons Leonard and Francis. 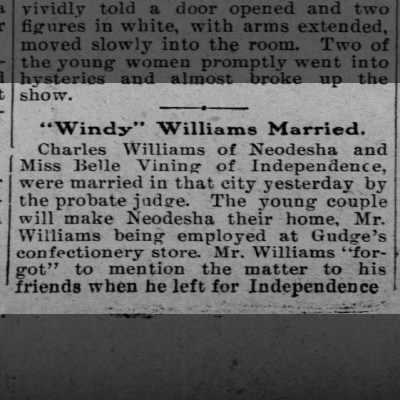 Charles “Windy” Williams and Belle Vining marry in Independence and will live in Neodesha. He is working at Gudge s confectionery store.

In my mother’s notes, she said the family thought Belle had divorced Charles Williams. After sleuthing about I found this November 1907 story.

The bandits who so brutally shot down Otis Taylor and O. J. Brown on the morning of July 16 while all were on a Frisco freight train near the Big Hill station have been caught and are now in jail at Independence. One is a negro named Charles Scott and the other a white man named Williams. The capture of these criminals is due to the vigilance of Sheriff Paxson who has been working continually on the case since the crimes were committed. Scott, the negro, has been in Independence for about six weeks. Three weeks ago this morning Paxon arrested him and he has been in jail ever since.

He has been severely “sweated” and finally divulged the name of his companion and Paxson got a line on him, Williams, nearly a month ago. He was finally run down and arrested in the Glass Mountains of Oklahoma by Paxson Saturday. Paxson rode 40 miles with him to a railroad station and came to Independence reaching there early this morning. Williams confessed the whole story to Paxson and related the details of the murder of tbe two young men who were returning from the Western Kansas harvest fields. According to Williams, he and Scott took the train at Neodesha and held up a number of harvesters on the train between. Neodesha and Oherryvale and after the train left the station here they attempted to take the money belonging to Taylor and Brown who put up a fight and Williams and Scott shot them down, alighted from the train and escaped.

They headed for Independence, passing Cherryvale below the Union Brick Plant. They look a Mo. Pacific train at Independence. Scott went to Little Rock and Williams to Oklahoma and they have been fugitives ever since until their capture as stated above.

Sheriff Paxson will receive $700 reward for the capture of these desperate men. The reward is made up as follows: $400 by the state, $200 by Labette county and $100 by the father ot Otis Taylor. Sheriff Holmes passed through Cherryvale Monday enroute to Independence to get these criminals Warrants charging each with first degree murder will be served on them and they will be given trial in the district court at Oswego. No small measure of credit is due Mr. Paxson for capturing these desperadoes. The crime was committed in Labette county but the officers of that county failed to capture the criminals, this work being done by Paxson and to him belongs the credit of capturing two desperate criminals.

The killing of Taylor and Brown in an attempt to rob them of their hard-earned. money was one of the most wanton murders ever committed in Southeastern Kansas and the penalties should, and no doubt will be, severe. – Cherryvale Republican.

We are informed that the Williams above mentioned as being one of the Big Hill murderers is “Windy” Williams, son of C. P. Williams, who some time ago ran the Frisco restaurant in Neodesha, but who, it is said, now lives at Hanna, Mo. .

A Nov. 20th article yielded a further tidbit of information. I’d wondered if the claim mentioned was the Vining frame/sod house in Woodward County, Oklahoma. A later article said he was apprehended in the Glass Mountain area.

“Windy” is married and has several children. He was living with his family on a claim in Oklahoma when arrested. The negro, Scott, is a well known Independence tough character who has had a police court record there since he was a mere lad. “Windy” got acquainted with the negro while a member of the Salvation Army at Independence. Both Williams and Scott are sure to go to the penitentiary for life.

The newspapers took an interest in the crime and kept providing more details. Here are some excerpts from a Nov. 28th article.

The confessions of both men tell of the cold-blooded crime from a criminal’s standpoint and in the language of a criminal. Not a single detail of the mur der near Cherry vale was left out They told of their start at Neodesha, when Scott proposed that they “ride the deck” of the freight. They tell of -meeting the two men on the train, of the conversation, of the hurriedly laid plot to hold them up and if need be shoot them. They tell of the quarrel and how when Williams was being hard pressed by Brown, he called for Scott , to shoot him.
…
To see him (Williams) in his cell and hear him talk, the average man would never dream of his having been a murderer and desperado. He has a dissipated look, but his size and attitude would not lead one to believe him a desperate man. Williams jests when the story he is telling is one of horror. He is a criminal and bears all the earmarks. Of the two confessions Williams’ seems to be the more cold-blooded. 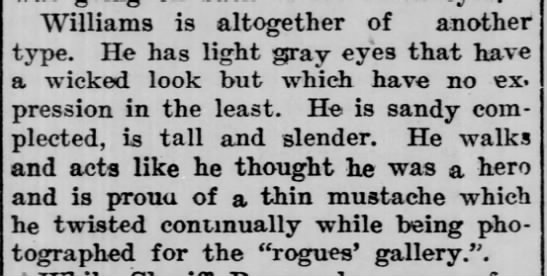 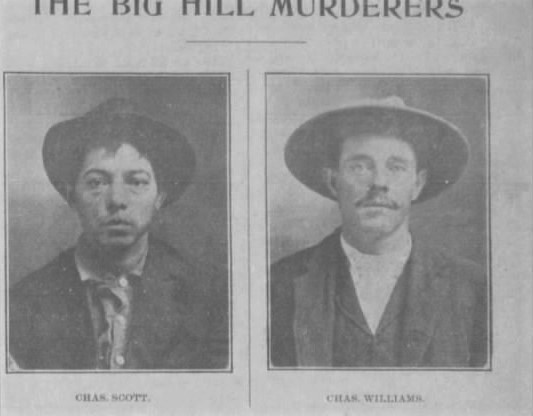 Williams was convicted and went to Lansing prison. After five years, his father petitioned for his release. Apparently, that was unsuccessful as he was still there in July of 1914 when he and 3 others escaped from the prison. The men made their escape by crawling through a seventy-yard tunnel into the enclosure of the women’s ward and then over the 40-foot wall with the aid of a rope and grab hook.” The article called him Charles Williams #2, so there were two men of the same name in Lansing at the same time.
I’m still searching for any information on a divorce by his wife. His date and place of death are also unknown.
By 1910, Belle is married to Orville Espie Brock and they have a son, Albert Ernest Brock, born in August. Her three children from the earlier marriage are there as well. Belle and Orville are together it seems until 1918 as she is listed as his contact on his draft registration form.
He is described as a farmer, with brown hair and eyes, tall and having a medium build. They lived in Woodward, Oklahoma.
I don’t have a photo of her second husband, Orville, but do have a picture of baby Albert. 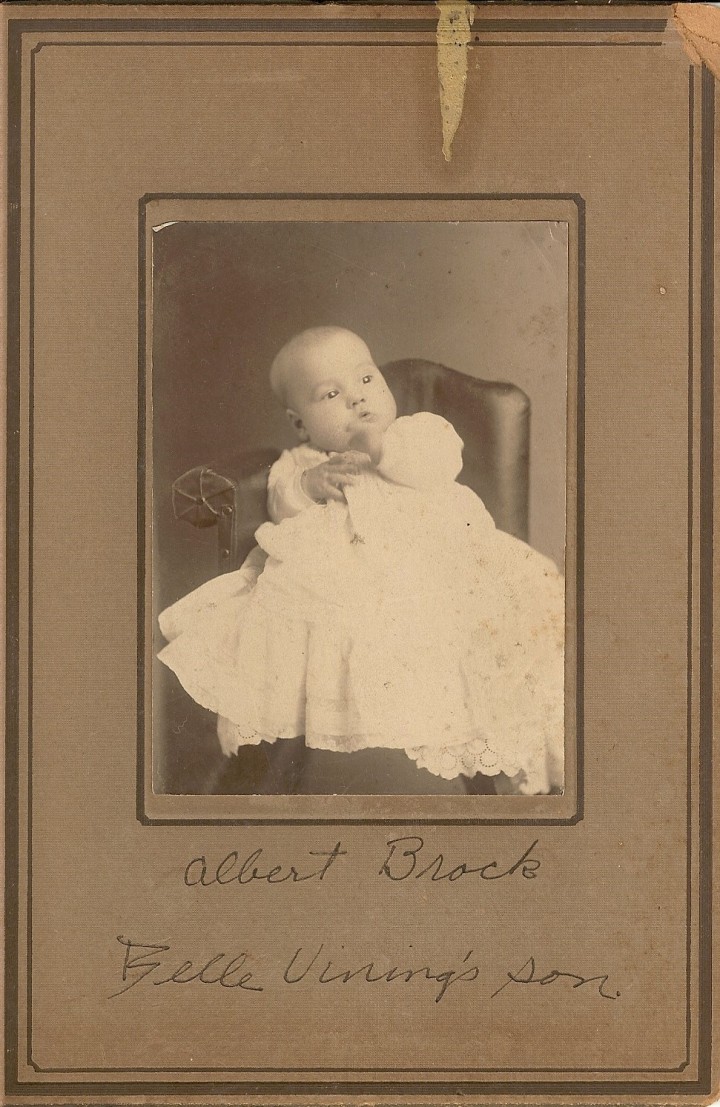 By 1930, Orville and Belle are divorced and she is married to her last husband, Frances Montgomery Scollins. They are living on a farm in Woodward, Oklahoma. The children are grown and out of the home. 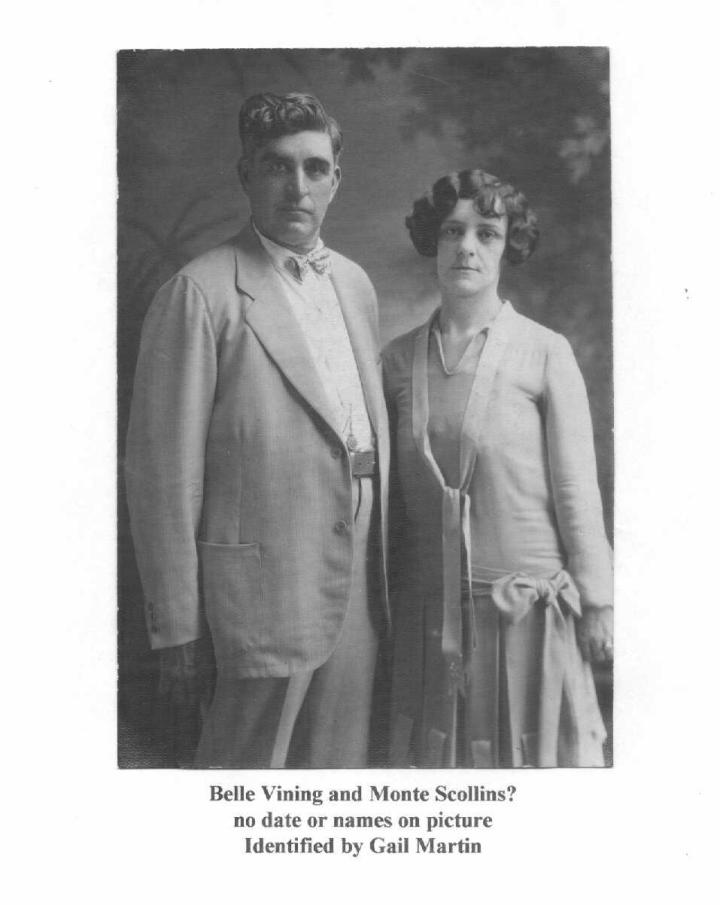