Time for another photo match-up. Actually, the example photo showing a vintage street scene is in color, not the usual sepia ones that Sepia Saturday shares. That gives me more options to find a similar scene in our family photo stash. Let’s see what I find. First I found an old grocery store in Tyro, […]

Hang Onto Your Hat

The inspiration photo for this Saturday features a vintage bicycle with a sidecar. The lady riding in that sidecar was wisely hanging onto her hat as they zipped along. Now, I’ve already shared my photo of my grandmother on a motorcycle and one showing my great-uncle and my grandfather with bicycles, so I don’t have […]

My grandmother had cousins in the area of Branson, Missouri. One of these cousins became famous because of his role in the book, Shepherd of the Hills by Harold Bell Wright. Published in 1907, it’s a story of the lives of Ozark pioneers at the end of the 1800s. I remember pulling the book from my mother’s bookshelf to read in my teen years.

Shepherd of the Hills was made into four movies and even a television movie. For 50 years, it featured in an outdoor pageant at Branson.  How does Ruth Vining McGhee’s cousin fit into this story?

One character in the book is called Fiddlin’ Jake. Family lore says that it is based on the life of Ruth’s first cousin, Charles Augustus Vining.  His father was Erastus Charles Vining, who was the younger brother of Ruth’s father, Henry Francis Vining.

The page below, found by my 3rd cousin, Nancy Henning gives quite a detailed account of his life. It verifies his role in the book by Wright.

Another tidbit from Vining historian Karolyn Roberts gives a similar story, “He started farming, and later the railroad in 1903, and then back to farming along with different sidelines from time to time. He got his nickname of Fiddlin Jake quite early and his father had taught him to play on an old violin handed down through the generations.”

This makes me wonder about which of the ancestors had also played the violin. Was it his father Erastus Charles Vining who died in 1906? Maybe it was his grandfather James M. Vining who died in 1897. No one in the family ever mentioned those as musicians.

I was able to find some clippings that showed Fiddlin Jake playing for some folk festivals. These are from the Joplin, Missouri paper, the Joplin Globe (1949 and 1950).

“The above pictures show contestants “warming up” for the second annual Ozark Folk Festival to be held at Eureka Springs, Ark., October 17 through 22. At the lower right, Gussey Viney, the reputedly “Fiddlin” Jake” of Harold Bell Wright’s “Shepherd of the Hills,” and George Baize from Stone County, Missouri, are shown rehearsing for the old fiddlers’ test.” 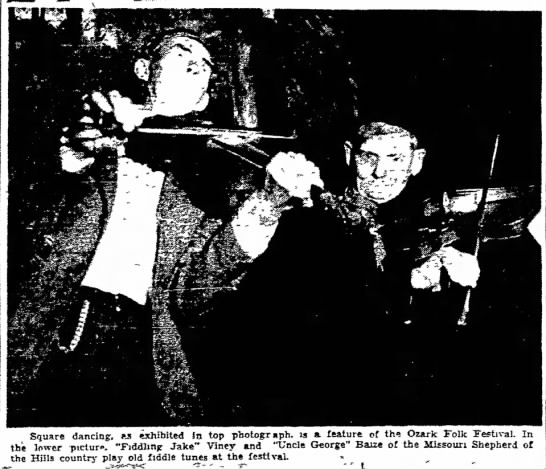 “Fiddling Jake” Viney and “Uncle George” Baize of the Missouri Shepherd of the Hills country play old fiddle tunes at the festival.”

Now, 70 years later, the folk festival is going strong, but the old fiddler, Jake Vining is no longer there. He died in 1951 at age 70. He’s buried at Evergreen Cemetery in Notch, Stone County, Missouri. I wonder who has that old fiddle now.

One thought on “Grandma’s Famous Cousin”