My mother, Gail Lee Martin, grew up in the 1930s but was more fortunate than many as her father had a job during those hard times. Working for Phillips Petroleum, meant his family had a company house to live in and a nearby school to attend. A friend of mine spoke to a classroom of […]

I saw a vintage photo of men in suits lounging on deck chairs. Although my grandfather, Clarence McGhee, made two ocean voyages, they weren’t on cruise ships with lavish buffets and deck chairs. Those voyages were aboard troopships that carried him and other doughboys to France in World War I and then home again in […]

Through the creative use of photoshop editing, my cousin had a four-generation picture expanded to six generations. What a great idea!

My mother’s sister, Melba McGhee married Norman Harlan in 1941 and their first child was Timothy (the toddler in the black and white photo). That dates the older photo to 1943 or so. Norman’s father, Lee Harlan, would have been 52 years old in this photo. Norman’s grandfather, Melville (wearing suspenders) was 87. He lived until 1952.

As you can see from their clothing, they were a farming family as were most of my family lines. The most recent additions to the picture are Tim’s son (Mike) and Mike’s son (Caden). I couldn’t just leave it at that. My curiosity took me to Ancestry to find Melville’s parents and then I couldn’t stop until I reached 1740 with 4 more generations. Even then, I only stopped because my weekly blog post was overdue.

There were Quakers along the line and that helped with marriages and births and locations. There’s a book about the Harlan family line that can be read online. The Madison News of 1880 to 1900 yielded a wealth of clippings with intriguing bits of information.

Melville’s father, Alpheus, came to Lyon County, Kansas in 1875, then in 1881 moved to Greenwood County, ending up in 1896 near Madison. He had a mill and a brickyard in that town. Two of Alpheus’ sons went to Arizona to mine for gold. One son, Tilman Lincoln Harlan, died tragically after just a few years of marriage. As I ranged further back, I found more millers in the family.

3rd street of Madison, Kansas in 1908. Which of these brick buildings was constructed of Harlan bricks? Photo from the collection of WSU.

There’s a lot of history to be found, but I must stop. Hopefully, someone in the Harlan family is already researching family history or the next generation will collect and preserve it. 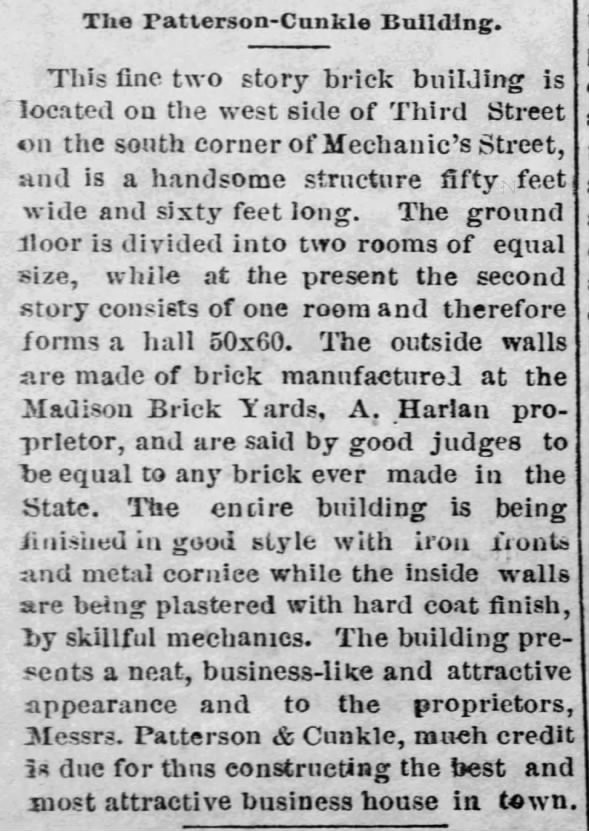 Amy Johnson Crow challenges genealogy bloggers and non-bloggers alike to think about our ancestors and share a story or photo about them. The challenge is “52 Ancestors in 52 Weeks.” This is week 3 of the 2020 challenge.

One thought on “A Long Line of Harlans”