One goal for me this year is to share the bits and pieces of family history that I find. Some stories will never be fully revealed to the current generation as they are lost to living memory and otherwise undocumented. Even though I don’t have the full story of someone, I do want to share the crumbs that I find and hope they are helpful to future searchers. 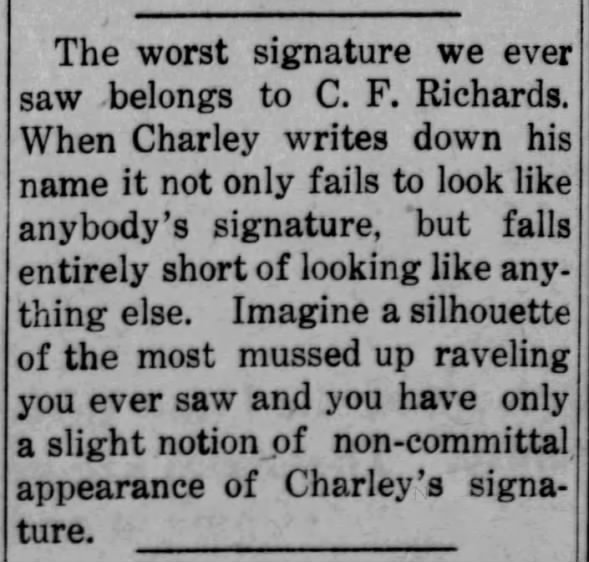 I happened upon this tidbit while hunting for news of the Richards and the Joy family in the Eudora and Lawrence vintage newspapers. My bigger project was to find out more about the Richards family’s involvement in the abolition movement leading up to the Civil War.

Charles F. Richards’ signature isn’t vital to our family story. He’s a first cousin 3 times removed since his father, Oscar Grinman Richards, was the cousin of our second great-grandmother, Dacy Richards Joy. She was orphaned at an early age, so was raised with her cousins. I’m guessing that Charley was like a nephew to Dacy.

Now, back to the signature. The news tidbit made me curious to see the actual signature so off I went to Ancestry to see what documents I could find. Hurrah! I found the signature on his 1914 application for a passport and it is every bit as bad as the newspaper described it.

There are a few other tidbits to glean from this document. Charles was born in Leavenworth County, Kansas, on 29 April 1866. He deals in real estate and insurance in Eudora, Kansas. It isn’t clear why he is going abroad. The description shows that he is 48-years-old, 5 feet 7 inches, with a high and full forehead. His eyes are blue, his nose is straight and common, his mouth is common, and his chin is full and round. His face is full and smooth with a fair complexion. He has brown hair but is balding.