This month, I’ll be featuring women from my family tree for Women’s History Month. I’ll launch this with my fourth great-grandmother, Charity Bourne. Her parents were William Bourne and Rosamond Jones (called Rosa). I wrote earlier about their burial place in Virginia.

Charity had a long life for that time, dying at age 83 on July 13, 1860 in Grayson County, Virginia. Her gravestone can be seen in the Blair Cemetery in Cliffview, Carroll County, Virginia.

She was born the 7th of November in 1775 in Grayson County, Virginia where her parents were among the first settlers. Here’s a little bit about the early history of Grayson County and the Bournes. There’s a photo of the log barn belonging to William Bourne. I’m amazed at the size of it and that it was still around in 1950 to be photographed for this story. 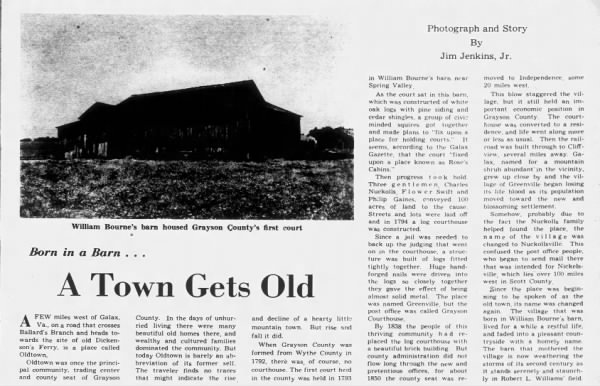 Here’s an excerpt from the clipping above: “When Grayson County was formed from Wythe County in 1792 there was, of course, no courthouse. The first court held in the county was held in 1793 in William Bourne’s barn near Spring Valley. As the court sat in this barn which was constructed of white oak logs with pine siding and cedar shingles, a group of civic minded squires got together and made plans to ‘fix upon a place for holding courts.’ It seems according to the Galax Gazette that the court ‘fixed upon a place known as Rose’s Cabins.’

Then progress took hold. Three gentlemen, Charles Nuckolls, Flower Swift, and Philip Gaines conveyed 100 acres of land to the cause. Streets and lots were laid off and in 1794 a log courthouse was constructed. Since a jail was needed to back up the judging that went on in the courthouse a structure was built of logs fitted tightly together. Huge hand-forged nails were driven into the logs so closely together they gave the effect of being almost solid metal. The place was named Greenville but the post office was called Grayson Courthouse.”

Also in 1793, Charity Bourne married John Blair. John Blair was the son of Thomas Blair (who came to America from Dundee, Forfarshire, Scotland) and Rebecca Andrews. His parents came to Chestnut Creek and acquired large tracts of land where his father, together with Matthew Dickey, manufactured iron. John was an only son and inherited most of his father’s land and became “the wealthiest and most influential man in the county. For years he sat in the Legislature but was defeated for re-election in 1842 by John Carroll.”

John and Charity lived at Blair’s Forge near what is now Blair Depot in Carroll County, Virginia. The couple had 9 children between 1794 and 1818.