A Tale of Two Bricks

Mom (Gail Lee Martin) wrote this story originally for the Kanhistique Magazine which published it in the August 1992 issue. She posted it later on the Our Echo website. A Tale of Two Bricks The next time you pick up a brick, take a second look. It might be a collector’s item. There has been […]

Karen Kolavalli is our guest blogger today: Mom and Dad have been on my mind a lot lately.  After they passed ten years ago, I acquired most of their extensive book collection.  In the years since they’ve been gone, the books have mostly stayed in boxes as I moved around the country, but recently I’ve […]

It’s great fun searching out the tidbits in vintage newspapers about our ancestors. Probably it’s more appealing to me as a retired librarian than to the average person. Of course, it’s a lot easier searching for news with my Newspapers.com online subscription using keywords. In my mother’s day, she had to visit libraries and struggle with the microfilm reader. The newspapers were not indexed then, so she would have to scan page after page looking for the family names. 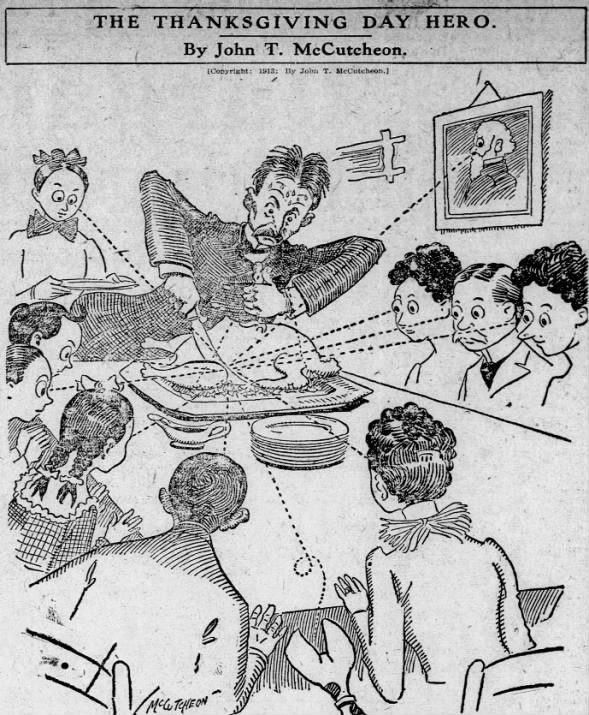 Here are some of my finds relating to Thanksgiving. 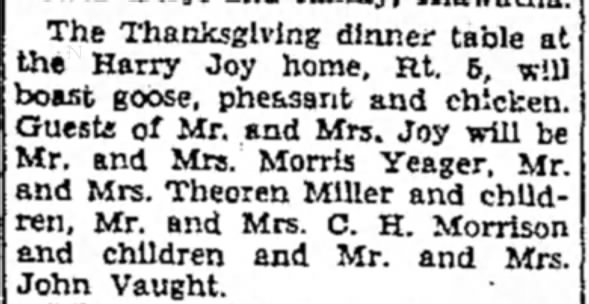 This 1946 Thanksgiving is at the home of my grand-uncle, Harry Joy. I found it interesting to see roast goose, pheasant, and chicken on the menu, but no turkey. It doesn’t give his wife’s name, but it is Mildred, also called Millie.

The guests included their daughter, Harriet, who was married to Theoren Miller. The Joys younger daughter, Orvetta was there also with her husband, Morris Yeager. I’ve no idea about the Morrison and Vaught families and how they connect. 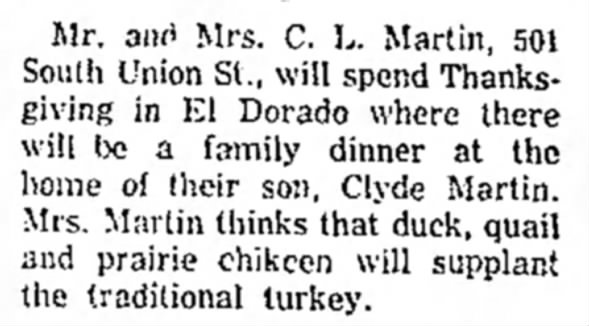 This 1959 Thanksgiving brings my grandparents, Charles Lorenzo and Cora, from Emporia to El Dorado for the holiday meal. Again, it is without turkey. Maybe Dad had been hunting while laid off work, but I don’t remember eating duck, quail, and prairie chicken. I would have been about 9-years-old. How many quail and prairie chickens would it take to feed six children and four adults?

Usually, the company handed out turkeys to the oilfield workers at Thanksgiving. Sometimes they just gave them a bottle of whiskey which probably was a big hit with the young single men, but was a big disappointment to those with family to feed.

Here are some more family stories about Thanksgiving: