Easter Ideas From the Depression Era

Easter 1924 Thu, Apr 17, 1924 – 2 ·(This is the year that Gail Lee McGhee was born. ) The Eureka Herald and Greenwood County Republican (Eureka, Kansas) · Newspapers.com –   Gail Lee Martin’s book gets a mention now and then, which shows the staying power of old-fashioned ways from the Great Depression era. It seems […]

D is for Delight in Reading

For the Sepia Saturday challenge, the inspiration photo showed a thoughtful young woman gazing at the camera. Her dress and the elaborate chair and busy tablecloth make me think that this is 1890 – 1900. She is quite modish with her lace collar and a gold chain. Her hand holds a book open on the […]

I’ve found several widows on my family tree who listed “laundress” as their occupation in the census. One was my great-grandmother, Nancy Jane Vining. Her parents were Ellenor and Ezra Babcock and she was first married to Burr Ashlock. After his death, she married James Vining. They 13 children together to go with the 3 children from her first marriage.

Life wasn’t easy for them. Her oldest son, James Ashlock, died at age 9. The following year, their infant son, William, died before his first birthday. Just four years later, their daughter, Sarah, entered the insane asylum in her teens. You can read her story at What Happened to Sadie Vining?

James and Nancy Jane were married 24 years before he died of typhoid. Her youngest child, Ruth, was less than a year old. Two of the sons were old enough to help support the family after James’ death.

By 1910, most of the children were grown and married. Nancy Jane at age 59 still had 17-year-old Scelia, 16-year-old Albert, and 12-year old Ruth at home. The family lived in Tyro, Kansas, and Nancy Jane worked as a laundress.

The graphic below is a romanticized version of laundry day in the 1920s. Possibly in 1910, my great-grandmother was scrubbing clothes each day on a washboard in a wooden tub. Perhaps Albert helped by carrying buckets of water. Scelia was old enough to be a help too and perhaps even Ruth assisted. 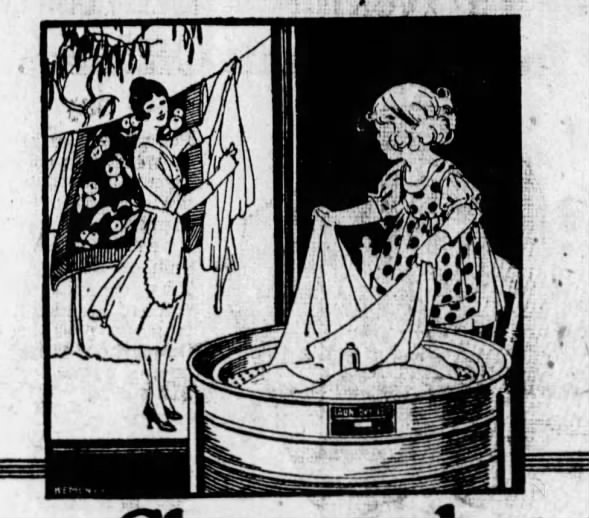 There is another possibility to go with this occupation. Henry Vining had a relative, Aaron Vining, who co-owned a commercial laundry in Neodesha. It’s possible that he employed the Widow Vining there. I’m unsure of the logistics involved for Nancy Jane to travel to Neodesha if she worked there. 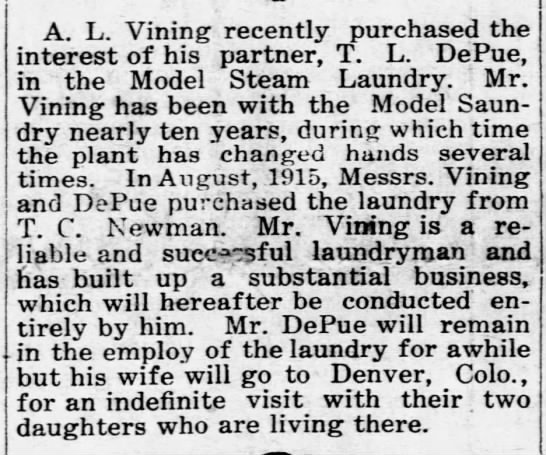 Our 3rd cousin, Nancy Henning has a wonderful photo of Aaron and Carrie Vining’s laundry in 1912. I stare at the faces but can’t tell if Nancy is among them.

I don’t have many photos of the Widow Vining. The one below was taken to send to her son Albert while he was over in France for World War I. Standing behind her are daughters, Lucy and Ruth. She was 67-years-old. None of the women in the photo of the laundry look old enough to be Nancy.

I’m carrying on my mother and grandmother’s work on our family history. In their time, working on genealogy meant trips to courthouses and cemeteries. If those were too far away, Mom sent a letter. It must have been an excruciating wait for that bit of information that might move the family line forward.

It seems that she already has the dates, location, and names, so I’m not sure what further information she felt might show up in the marriage application. Of course, it would be pretty nifty to see your ancestor’s signature.

Sadly, the requested document was not to arrive.

How disappointing. I checked on Ancestry to see if somehow a copy of the marriage papers might miraculously have been saved and now online. Nope, the ashes are long blown away in the Missouri winds and no record remains.

Now, Gentry County has an online site with the email address of the Recorder which saves the cost of a stamp and gets your query there much faster. To search their records online, you’ll need a credit card. Ten dollars buys a fifteen-minute search pass so have your questions well-thought out and ready to make the most of that time.

Here’s the new, since 1885, courthouse in Gentry County, Missouri.

So, how did the marriage of Burr Ashlock and Nancy Jane Babcock turn out? The couple had three children:

Less than a year after the birth of the youngest son, Burr Ashlock died on the 22 of September in 1973 in Johnson, Missouri. I couldn’t find any old newspapers to explain why he died at the age of 30.

Nancy Jane (Babcock) Ashlock remarried six months later in Wilson County, Kansas at the home of her parents, Ezra B Babcock (1821–1886) and Ellenor Nancy Jane Wright (1820–1882). The groom was Henry Francis Vining who had come to Kansas from East Windsor, Connecticut in the 1850s. It was not unusual to marry fairly quickly in those days with young children needing support.

(This post is part of the 52 Ancestors in 52 Weeks blog challenge. Check back for future posts.)

I was delighted to find a new photo on ancestry.com of Isaac Ashlock, my grandmother’s half-brother. It’s always a great discovery to find family photos from the 1800s and someone’s family tree with marriages and children’s names all laid out for you.

Unfortunately the more I collected from the other tree, the more I noticed that something wasn’t right. Finally I had to acknowledge that there were two men with almost identical names and dates and both born in Missouri in the 1870s.

Here’s my effort to sort them out:

►Isaac “Ike” Alonzo Ashlock born 22 December 1872 at Rosehill, Johnson, Missouri, USA. Parents: Burr H Ashlock 1843 – 1873 and Nancy Jane Babcock 1851 – 1924. Nancy Jane is my great-grandmother. Isaac died 11 June 1945 at age 72 in Alberta, Canada. My grandmother, Ruth Vining said her half-brother’s wife was Jennette and after she died, he married Ora. Ora was Jennette’s daughter from a previous marriage, so she was Isaac’s step-daughter. After Isaac died, his brother Luther married Ora later the same year and brought her to Kansas. She later divorced him.

►Isaac Olonzo Ashlock (in some trees showing the same birth and death date and locations and parents as the Isaac above) But cperk69’s tree shows a wife named Winnifred Sarah Guffey 1874 – 1973. Arrbaldwin’s tree has Wineyfred Sarah Guffey married to Isaac Olonzo Ashlock who died 16 Nov 1957. That tree shows Isaac O. Ashlock’s parents as James Henry Ashlock 1837 – 1912 and Margaret Elizabeth Sebring 1840 –. This Isaac was born 22 September 1873 in Adair, Missouri, USA. He is nine months older than the Isaac in my family and died 12 years after our Isaac. This tree looks authentic with a number of photos of Winny and Isaac who it also calls Ilonzo. There’s even a 50th wedding anniversary photo. He lived in Missouri until 1930 the couple shows up in the Washington state census.

So the photos I found are of the second Isaac, not the one in my family tree. Unfortunately, a number of trees on ancestry have a mixture of dates, locations, relationships from the two men. I’ll try to get the correct info in place and inform the owners of the other trees so they can correct them.

Here’s a photo of our Isaac Alonzo Ashlock with his sister.

Issac Ashlock and his sister Sarilda. (photo from the collection of Gail Lee Martin)

Read more about Isaac Ashlock’s marriages and how he is related to the Vinings.