Karen Kolavalli is our guest blogger today: Mom and Dad have been on my mind a lot lately.  After they passed ten years ago, I acquired most of their extensive book collection.  In the years since they’ve been gone, the books have mostly stayed in boxes as I moved around the country, but recently I’ve […]

It was just a few days before Christmas in 1896 when Joseph Harvey Mikesell suddenly died. The news appeared in The Neodesha Daily Sun, (Neodesha, Kansas) 24 Dec 1896, page 2. His wife Sarilda Jane Ashlock was my grandmother, Ruth Vining’s half-sister. They were 30 years apart in age, as Ruth was the youngest of the large family.

Joseph was described by the Wilson County Sun as a fisherman and trapper. He was just returning with wagon and team from a two or three weeks trapping expedition up the river. He had stopped at Dun station to sell his hides when he was stricken with apoplexy and died in C. S. Adell’s store, about nine o’clock at night.

At Dun Station, Wednesday, Dec. 23, 1896, Joseph H. Mikesell, of this city. Mr. Mikesell had been on a protracted hunting and trapping expedition, and was on his way back to Neodesha to spend Christmas. He stopped at Adell’s store at Dun yesterday at about 3 o’clock in the afternoon and disposed of his game, hides etc., and had stepped outside the door when he suffered a stroke of apoplexy and died at 9 o’clock last night. He was unconcious almost from the time of the stroke and did not suffer. The stroke, it is supposed, was brought on by exposure, and was unheralded by any warning whatever.

Joseph H. Mikesell was born in Elkhart county Ind., April 17, 1847. During the year ’64 he enlisted and had the distinction of being the youngest soldier in the 16th Kansas Regiment, Company I, which was stationed at Fort Leavenworth. In the winter of ’64 he went with Gen. McCook’s brigade to Santa Fe, N. M . to quell the Indian-Mexican troubles. Returning to Kansas in the spring of ’65 he participated in the expedition against the Price raiders. At Neutonia, Mo., he was wounded, but remained in the hospital at Fort Scott only a few days, and returned to service while scarcely able for duty, and served until mustered out by honorable discharge.

He was married, Jan. 30, 1884 to Miss Sarilda Ashlock at this place, and leaves her with five children to mourn the loss of a kind husband and father.

The remains were brought home this afternoon and funeral services will he conducted at the home on Ohio street, between 5th and 6th, by Elder Bays, tomorrow at 10 a.m.

Here’s the actual funeral as described by the newspaper: There were so many people that the house could not hold them all.

These two accounts made me wonder about the effect it must have had on the family left behind. In an era with no safety net, few jobs for women, and with children aged 5 to 11 years, Sarilda faced an uncertain future at age 29. She only had a third-grade education (according to the 1940 census). 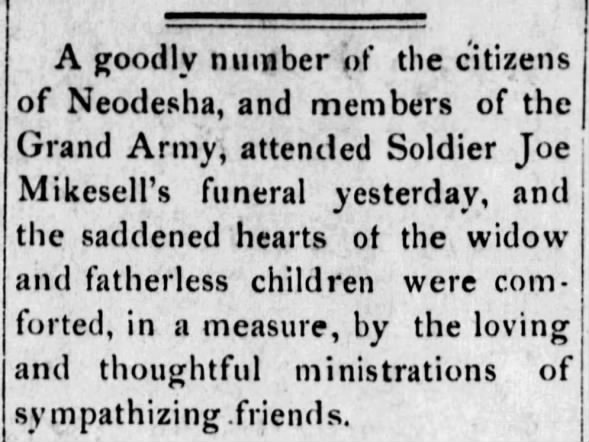 The very next month, the neighbors and friends held a pound party for Sarilda. I’d never heard of this custom, but the clipping gives some insight into it. Searching further, I found that a pound party is where each person brings a pound of something as an offering of support. I suppose many of the packages would have contained a pound of flour or other food.

The widow of the late J. H, Mikesell was treated to a generous surprise Sunday evening. When she returned home from a visit of several days in Chetopa township and entered the little home so recently saddened by the death of her husband, she found new paper on the walls and overhead, a carpet which she had recently finished, all sewed together and nicely put down, and the table laden with packages, parcels and bundles of the substantial of life.

Such was the method adopted by her many sympathizing neighbor friends who put into deeds their thoughts of love and pity. The pound party occurred and all was in readiness Saturday night for Mrs. Mikesell’s appearance but the inclement weather made her return home impossible, until Sunday afternoon. The great source of Good certainly has his abiding place in the hearts of many Neodesha people, for it has been our observation that such incidents as this have been more numerous here than in any of the surrounding cities during the past few years.

The 1900 census shows Sarilda Mikesell, widow, supporting her five children by working as a washerwoman. The family is living in Neodesha, Kansas in Wilson County. In 1902, her oldest daughter, Grace, marries at age 16.

Sometime after 1900, Sarilda marries John B. Addis. I presume they divorce, as he continues living in Neodesha, Kansas while she leaves for Haskew, Oklahoma to prove up a claim she took there in the summer of 1903. She takes the two youngest children with her. Ethel Mikesell, the oldest girl at home, “will keep house for her uncle Dave here.”  (The Neodesha Daily Sun, May 24, 1904,  Page 4)

It was eight years after Joseph Mikesell’s sudden death that Sarilda was able to get a pension. I presume this is from his military service.

“B.S. Peavy, the pension agent of this city, has secured the allowance of original pension tor the minor children of the late Joseph Mikesell, in 73 days from the date of filing a claim therefor in the pension office, also the accrued pension due to Mrs. Sarilda Addis under widow’s certificate No. 463.504.” (Wilson County Sun, Neodesha, Kansas, 05 Feb 1904, Page 5) 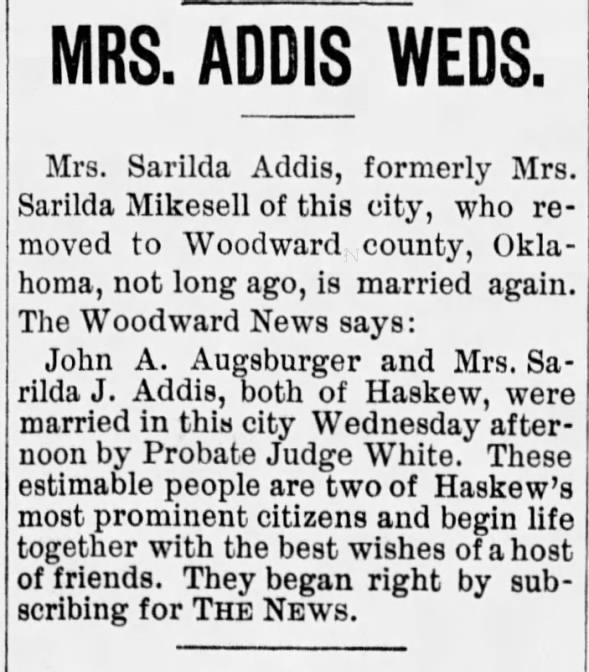 Sarilda and her new husband, John Augustus Augsburger, eventually move to Texas. By the 1920 census, the children are grown and out on their own. It says she is working as a midwife. Then in 1930, she’s working as a nurse. By 1935, Sarilda is widowed again. She lives sixteen years as a widow, dying at age 83 in 1951.

6 thoughts on “A Surprise Death”